With a slight hangover and feeling pretty tired, I decided to walk downtown again.

Unbeknownst to me, Bogota’s roads close on a Sunday for the city to exercise!

I couldn’t quite get my head round it – it was like an apocalypse had occurred as there weren’t even any buses going past! I was so used to the fume-filled air and now I was finally breathing the pure Andes air that I had envisioned when I first arrived.

People were cycling, running, rollerblading and walking their dogs on the road. Mind-boggling.

I reached the Parque Nacional, with the Monserrate mountain in the background, and could hear lots of music so I decided to investigate. Teenagers and adults, young and old were singing, beating their drums and dancing in the best anti-bullying campaign I’ve ever seen. 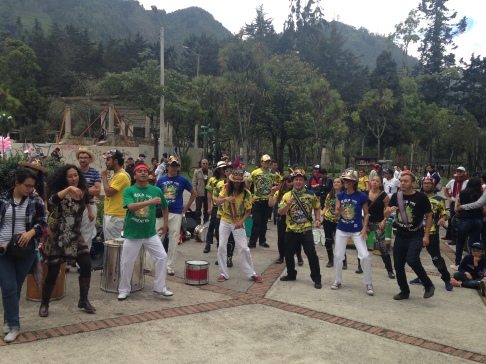 I love the fact that Colombians are so rhythmic and dance to the beat of drums, in the middle of park, in the middle of the day. To me, who only dances when she’s pissed or in the seclusion of her own home, it felt very liberating.  I was slowly adjusting to this new culture.

As I made my way out of the park, I passed a public Zumba class!  This was spectacular people-watching!  There were macho men, housewives, young men and girls, gay guys, young kids, all concentrating on the instructor and giving it their all.  Brilliant!!

When I reached downtown, the streets were packed.  Everyone comes out on a Sunday!

Break dancers, folk dancers and musicians of every kind were street performing, being encouraged by families and kids on bikes: and still the chocolate, cigarette and juice sellers were plying their wares.  There were second/third hand market stalls in the empty car parks and the poverty was quite noticeable.

Meandering through I reached the Museo del Oro (Gold Museum) just outside on the borders of Centro and La Candelaria districts.

This is my kind of museum.  You can tell a lot of money has been spent on it – its modern, the displays are well lit and well-informed and it helps that the main subject is gold!

The art is incredible and the history is so interesting.  There’s one particular display that you have to queue for and its well worth it as they’ve created magic with the lighting and gold.

Well satisfied, I made my way back to La Pinta for my final night.  I couldn’t be bothered to go out so I stopped off at the supermarket and grabbed a make-it-yourself salad (I was craving vegetables of any kind as Colombians don’t really seem to do veggies) and hung out in the public area.

There I met a very inspirational guy, who spent his life living and consulting in Colombia and the rest of South America: even though he had an amazing job, he had no fixed abode, he slept in hostels, and followed his dreams.  He challenged me and my thought processes and put a few questions in my head about what I want to do with my life.  I only met him for about 20 minutes, but I love those kinds of intense conversations you can have with complete strangers who are, themselves, gold nuggets amongst brown pebbles.

From that chance meeting, and from the love I was feeling from my Colombian friends and family, and from the Colombian people in general, I could feel my mind and heart opening and I started to feel like I was waking up from the routine, mundane slumber of my everyday life.

One thought on “Exercise and Gold”