I was hugely excited to be going to Hawksmoor.

My expectations were immense as all the “City” boys I know who dine out at all the fancy steak restaurants in London rave about how its the best steak they’ve ever eaten.

Dare I say it?  I didn’t think it was!!  There, I’m out of the closet.  I feel like I’m blaspheming, will get a barrage of abuse and should check myself into The Priory. “Hello, my name’s the Gutsy Voyager and I’m in Steak Denial”.

The experience itself was great though.  And don’t get me wrong, it was a very good steak but just not the best I’ve eaten.

Hawksmoor Seven Dials is a nondescript building with a nondescript entrance.  Then you go downstairs to a beautifully polished dark wooden bar with high stools, gleaming brass and superb service.

Dining out with my boss and our lawyer, my aperitif of choice (if you can call it that) was a gin and tonic.  Old Tom was sampled and boy was it strong! I think the cheeky so and so’s have a standard measure of 50ml rather than the usual 25ml – unless of course I’m getting soft in my old age!

We only had our table for 2 hours as they obviously want to get as much turnover in the restaurant as possible, but this wasn’t a problem even though the lawyer was late and we stayed in the bar for a while having our drinks.

The restaurant is cavernous and they must have had the customer in mind when designing the space as you’re not cramped in.  There were no bumping elbows, bums or knees with the neighbours. 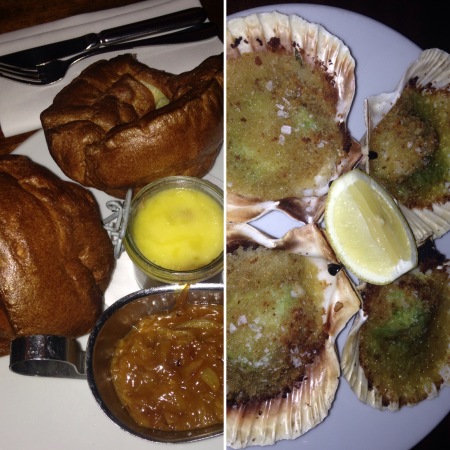 For a starter I chose roast scallops with white port and garlic (£15 gulp!) and the lawyer had potted beef & bacon with Yorkshires (£8.75 – much more reasonable).

The scallops were saturated with garlic, which was wonderful, but I couldn’t taste the delicacy of the seafood.

Then it was on to the mains.  My boss chose t-bone, the lawyer porterhouse and I had the fillet steak.

So I’m not sure whether it was because the scallops were completely covered in garlic but I couldn’t taste the steak!  Not good.

However, the meat was beautifully cooked, seared on the outside and completely tender on the inside (it looked a bit rude when I cut into it – use your imagination!), the chips were nice and other sides just as good. 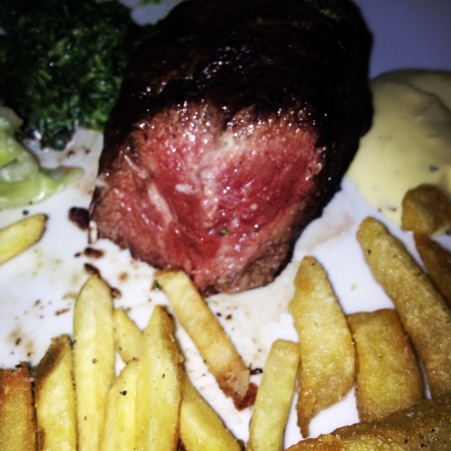 And one of the good things about Hawksmoor is that they do carafes of wine.  I was on red and fancied more than one glass so having less than a bottle worked out well (still over £30).  Like I said, they really have thought about the customer experience.

Next was desserts.  We shared two – the crunchy bar (50p goes to Action Against Hunger) and salted caramel rolos – two of my favourite chocolates when I was growing up.

But don’t forget the price tag – over £360 for the three of us!!  The t-bone alone was over £70. So its not for the fainthearted and is definitely a treat, unless you’re a City boy of course :-).