After two days of nothingness I felt it was time to venture out into the big wide world that is Siggiewi village.

All the front doors of the houses open directly on to the street. Some are well tended, others are naturally shabby chic, some have saints nailed above their house numbers, others have cacti and blossoming flowers or sleeping cats outside their doorways.

Walking down twisting narrow streets I reached the piazza with the statue of St Nicholas. Old men spinning stories, looked like wood pigeons at a convention as they escaped the brooms of their wives.

Covering my shoulders I ventured into the Church of St Nicholas. Built around the late 1600s, it has beautifully ornate ceilings, interesting stonework and superb acoustics for Mass. Feeling awkward and disrespectful as I gawped at the artwork, graves and religious edifices whilst taking photos as Mass was being read, I silently wandered around.

To be honest, I felt slightly awkward anyway as I was gawped at constantly. But that’s what ghostly white skin and blonde hair does in a dark haired, dark skinned country.

Returning “home” I got ready to go out. Maxi dress, flats and full on eye makeup would do for my dining experience.

We were picked up by a Maltese friend who drove like a maniac through the narrow streets of the island to Mdina.

Mdina is an ancient fortress and dates back several thousand years.  It’s survived many an invasion and as one of the legends goes, the Ottomans tried to capture it but were repelled by a huge army.  This massive unit of scary men turned out to be the women and children of the city donning their armour as all the men were away fighting! Girl power!

It’s walls are incredibly high and pathways are narrow and, as was pointed out to me, none are straight so you can’t get killed by a bow and arrow walking down the road!

The restaurant we chose was Bacchus; housed in what were two mid-1600s gunpowder storage chambers for the main fortified bastion.  As well as preserving this amazing history, it has a more modern, huge function room and terrace, perfect for a Maltese wedding where its normal for over 500 guests to be invited!

I decided to go traditional. Maltese snails for starter “Mille Feuilles of fresh local snails with garlic aioli puree” (my first time) and rabbit for main “Braised and stuffed rabbit leg served with red wine, garlic and thyme sauce” (my second time having rabbit). I was surprised by the snails, they tasted like mushrooms and the rabbit leg was so rich and delicious in its red wine gravy. I was in absolute heaven.  Even writing about it now I’m salivating. Talking of wine (rather than salivation), it flowed a lot and there was an extensive menu to choose from. 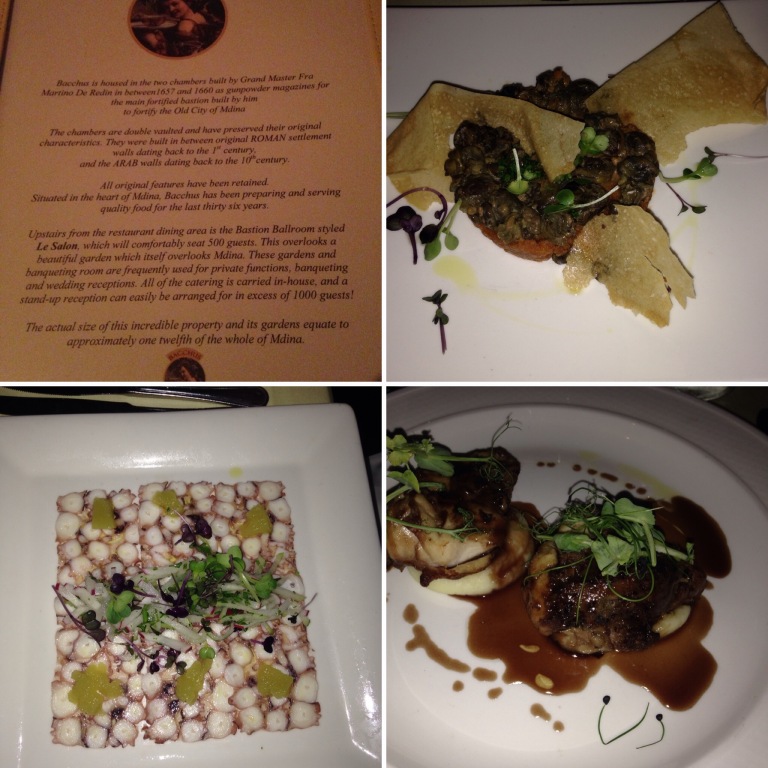 Worryingly, our Maltese friend and nominated driver also had wine flowing down his throat. Apparently that’s quite usual for the local men. There were no seat belts in the back of his dented, clapped out car and my girl-friend and I gripped each other’s hands like nobody’s business as we raced across the island.  I was told the driving was bad in Malta but I had no idea its because road rules are held with contempt. Maybe its the warrior in everyone that makes them think they’re invincible?!

The walk back to the car was stunning. Low lighting threw shadows in front of us as we meandered along. No-one else was around. It was quiet in this “Silent City” and ghosts of the past walked with us. To top off the stories of the myriad of foreign invasions, I even saw a British red phone box!