Saturday loomed with a slight hangover and a day of drinking again. I really couldn’t be bothered but in good British fashion I made my lip stiff and got on with it.

Arriving in Covent Garden an hour before I was due to meet my girlfriends I nipped into Neal’s Yard for the first time. I didn’t know what to expect – I thought it would be a dead end alleyway with a shop at the end.

How wrong I was.

The sun was glinting off the cobbled yard, colourful signs and trendy sunglasses; it was a veritable hot spot for cafes, people hanging out, spa and beauty shops.

Neal’s Yard Remedies shop is overwhelmingly fragrant. As I tried to smell my way through their gift sets I couldn’t make out the individual fragrances of rose, ylang ylang and frankincense.

The manageress was brilliant. She greeted me warmly and we spoke for ages about well-being and meditation. Apparently their products are medicinal so when I asked what would be good for a friend of mine, she couldn’t recommend a particular remedy unless she saw them and could understand their ailments – fair enough.

Armed with my wares I set off to find the Lamb and Flag pub to meet the girls.

The pub is tucked down an alley and quite difficult to spot from the wrong end. Downstairs was already filling up in preparation for the rugby but I’d pre- booked a table and made my way up to the dining room. Luckily there was a screen directly in front of us so we could watch South Africa vs Japan.

We’re a bunch of ex-work colleagues made up of a Southerner (me), Londoner, East Midlander and a Saffa (otherwise known as a South African).

Although we don’t see each other very often we share a bond and I was privileged enough to be invited to the Saffa’s wedding in Stellenbosch, South Africa, and both the East Midlander and I went to the Londoners’ wedding in Gujarat, India.

Ordering nibbles to start – houmous and pita, and calamari – we waited for the Londoner to arrive.

Blood sugar levels running low and Frontier lager, Fullers own brand, keeping me going, we eventually ordered. Sausage and mash (three sausages), pie of the day (lamb and rosemary) and two fish finger sandwiches and chips. A shared dessert of sticky toffee pudding was polished off at the end – just what we needed.

I still had in my head their big defeat from the World Cup 1995 when New Zealand beat them 145-17. The Japanese played valiantly. Tiny against the hugeness of the Kiwis and in particular Jonah Lomu, they flew at him like kamikaze pilots trying to stop the leviathan of a man.

With elevated feelings of disappointment for my friend and joy that the underdog won for me, we set off to enjoy our respective evenings.

I trekked across London to the Chiltern Hills to stay at my “sister’s” house, or as the youths of today call it my “BEA’s” house

Greeted at their new front door by two very tall children in very long onesies and a slipper attached to a ginger cocker spaniel whose tail was beating like Dave Grohl playing the drums for Nirvana, we crashed and burned by 10.30pm. Living the dream on a Saturday night!

Shipping one child off to Thorpe Park on Sunday morning, my BEA and I waited for the tween to emerge from her slumber. After much cajoling and outfit and hairstyle changing, we managed to leave the house just after midday for a nice long walk.

Venturing up a single track lane to The Lee, near Great Missenden, we emerged and parked by the village green.

How beautiful and idyllic the village is. It’s most well-known in the area for housing the Liberty family (that of the famous shop), and for having a couple of good pubs.

A family was picking and collecting apples from the trees, the children bowling them like cricket balls. The sun illuminated the green of the grass and I half expected everyone from the houses surrounding the green to run out, start fielding or maybe set up a village fete with apple bobbing, coconuts and a white elephant stall.

The walk took us through wood and farmlands, past huge, curious brown and white and black cows (the tween panicked and thought they were going to kill the dog or her!), a field of alpacas and small hamlets with old inns converted into houses.

Deciding it was a good idea to go walkabout, the dog ran off after the alpacas. With visions of a David and Goliath fight between them, we shouted and whistled desperately to gain his attention. Not being the brightest button, he tore up the hill, happy as a happy thing and promptly jumped into a cattle trough. Emerging sodden as a bedraggled rat, we walked the remaining two minutes to the pub for lunch, hoping that he’d still be allowed in the bar area.

With the grubby pooch still bouncing along without a care in the world, we arrived at the Old Swan Pub at Swan Bottom.

There’s a formal dining restaurant and dogs are allowed in the bar area and garden. We opted for the garden since the sun was making a rare appearance.

Ordering roast beef from the Sunday lunch menu at £14 a pop, it wasn’t the cheapest meal we’d ever had in a village in the middle of nowhere, but the portions were huge. 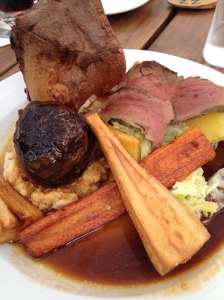 A steaming plate arrived of rare roast beef with roasted carrot, parsnip and potatoes together with a beef faggot, Yorkshire pudding, horseradish sauce and (we think) celeriac mash all delivered with a red wine gravy which of course we had to have more of.

[Why do pubs/restaurants never give you enough gravy? At least they didn’t call it jus.]

With bellies full and tiredness setting in, we set off on the rest of the circular walk back to the car, getting lost along the way.

When we couldn’t figure out where we were, a very helpful couple interrupted their picnic lunch and stood and aided us with their walking app.

Unfortunately the dog with its all seeing eyes, spotted their turkey ham resting in its packet on the bench and promptly swooped in and ate as much as it could garner before being forcibly removed – oops!

Wow I felt guilty! What are you supposed to do in a situation like that? Say sorry very meekly and move on? There were no shops around so that’s what we did. Sorry, sorry, sorry!

Getting back to the car, we made up stories about how I should buy a pad in the village. It’s not a problem, houses are only £875k to £1.7m!! A mere snip!

(BEA meaning – Urban Dictionary: The name of the most amazing girl that you’ll ever meet. With her, you get everything. A mixture of both beauty and an amazing personality, something rare to find nowadays. Someone that’s kind and caring, smart, funny, good sense of humor [sic], fun and easy to be around, mysterious in some ways, shy yet outgoing, sometimes dorky, etc. It’s not hard at all to fall in love with this girl, both as a friend and a lover. When you hold her hand or wrap your arms around her, you’ll never want to let go. She is a blessing in the lives of all those that are privileged to have her in their life. She makes you do things that you’ve never done before. If you’re lucky enough to have her, you should never let her go. She is just that amazing and should be cherished.)