After suffering from a stroppy air stewardess; not being able to sit next to the exit on the plane as I only speak ‘un poquito d’Espanol’; getting glared at by the stewardess for ordering another glass of wine for dinner (I had two); being the last person to get their baggage at the carousel; not being able to use the cash machine at the airport and begging the bureau de change men to come out from behind their protective glass to help me (you can’t get cash outside Colombia); trying not to cry as I was exhausted, overwhelmed and scared; being hassled by a taxi tout whilst trying to explain I already had a cab booked; not being able to find the taxi driver; calling the hostel at 4am to find out where the driver was; getting annoyed with the tout who still wouldn’t leave me alone; finding my driver, watching him struggle with my luggage and trying to have a conversation with him; I finally arrived at La Pinta hostel on Calle 65.

As soon as I got to the La Pinta, I realised I’d made a huge faux pas by underestimating how exhausted I’d feel and had failed to book a room for ‘the night’. Unfortunately for me, the hostel was full and my room wouldn’t be ready until 3pm.

The guy on reception was kind hearted however, and allowed me to get a couple of hours sleep on the sofa in the TV area on the third floor.

Why only a couple of hours? Well, in true over-ambitious style, I had booked myself on the Bogota Foodie tour at 9am!

Totally flustered and forgetting basic bathroom necessities, I got ready, running up and down three flights of stairs to and from the left luggage room where my oversized luggage was stored, to the shared bathrooms.

I was to meet Loon, the Bogota Foodie, at McDonald’s café in downtown Bogota. Apparently it would take me 45 minutes to walk there so I needed to leave by 8am.

Setting off down Avenida Carrera 7, a little nervous, I was practically gassed my diesel fumes. I’d equated the Andes with clean, pure air and I realised immediately my assumptive nature was going to be challenged along this trip.

When I finally made it to Maccy Ds after an hour’s walk, Loon was there with an American couple and ushered us on to a local bus to take us to Paloquemao Market.

The bus journey was awesome!  The buses are similar to mini-buses and as a seasoned London commuter I thought I’d be ok standing up in the aisle as the bus was packed, and admittedly, I was slightly arrogant about what a seasoned public transport goer I was.  Karma bit me on the bum however and I was thrown all over the place!  Serves me right for being so Lordy.

When we reached Paloquemao Market, the first thing that struck me was the colour and size of the fruit being sold outside.  Loon took us inside and it was foodie heaven! 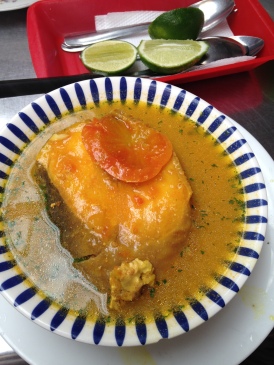 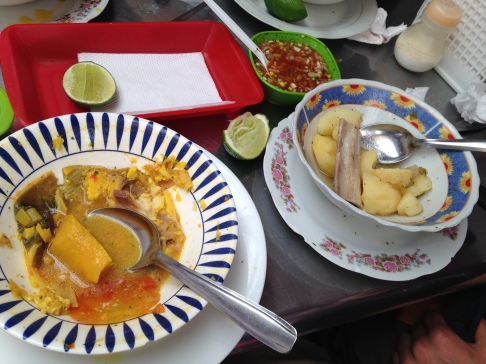 Passing vegetable, herb, flower, butcher and potato stalls, we made our way to the fruit stall section of the market.  Half the fruit I’d never seen before and we tried quite a variety:

Feijoa (green, bubblegum tasting fruit), pitaya (dragon fruit), granadilla (an orange round fruit that had passionfruit like pulp on the inside), mango de azucar (sugar mangos), uchuva (little yellow round fruit with a slightly bitter flavour). 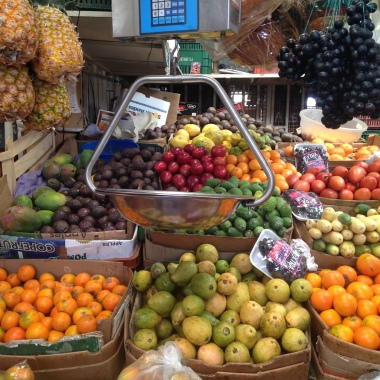 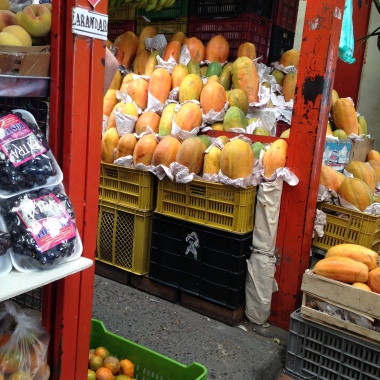 Next it was on to a side stall where we had arepa de huevo (deep fried arepa with egg and shredded beef), bunuelo (big round deep fried cheese bread) and pan de bono (baked cheese bread filled with guava jam (known as a bocadillo in Colombia)).

The arepa de heuvo was a particular favourite of mine.

As if that wasn’t enough, we made our way to a stall that looked like a ticket booth except for the giant cooked pig in its window!  We ate our way through a meal of lechona (pork and rice dish stuffed in a pig).

All this eating was thirsty work so we went back through the market to a juice bar, sat on stools and tried curuba (orange coloured smoothie that tasted like liquid yoghurt), lulo (lighter more refreshing juice that was brownish in colour), guanabana (white smoothie that was hard to drink through the straw) and maracuya (passion fruit juice).

I’m in love with lulo!

With stomachs bursting and eyes definitely bigger than our bellies, we left the market and caught a taxi to one of the shopping centres for dessert.

Having bonded over our equal appreciation of food, we three foodie tourists took ourselves off to a coffee shop for ablutions and a rest once the tour was over.

By this point I was dying on my feet so asked them to order me a cab – one of the tourists was a South American-American whose father lived in Bogota.

Two cabs failed to arrive so, still not feeling brave, I decided to walk back.  Exercise is good for you after all!

To break up the walk, I popped into the Museo Nacional which is a bog standard museum. I’m not really a massive museum person although I love art and textile exhibitions, so it did the job on education and was interesting enough.

Luckily when I got back, my room was ready and I chilled for the rest of the day and was determined to stay awake until at least 8pm!