With my lily-white legs on show and wearing brand new shorts which just about fitted (the diet had gone out the window way before I headed off on hols), I managed to find the Plaza Botero in the La Candelaria neighbourhood of Medellin after getting royally lost (it was only a 10 minute walk from 61Prado guesthouse).

Singing my own version of the Police song, ‘an English girl lost in Medellin’, I passed an old folks’ home where they were wheeled out to enjoy the Spring sunshine (I think the old men were loving the shorts or maybe it was the ghostly hue of my skin!), a beautiful bright yellow church, car mechanics, people’s houses and generally all things local.

The older locals were really friendly and although most didn’t speak English, the universal language of sign came in very handy when asking for directions.  Thank god I remembered my lefts and rights from Spanish class!

The Plaza Botero is wonderful!  I didn’t know who Botero was and for those of you who don’t, he’s one of the most famous artists to come out of Colombia, and in the world, and has a wicked sense of humour depicted in his paintings and sculptures. Right up my street!

His sculptures litter the Plaza and huge bottoms, thighs, faces and hands watch over you. They’re such fun! 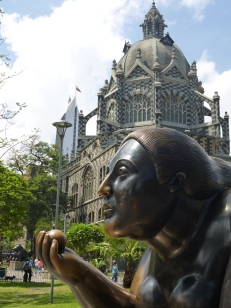 Still wary of sightseeing on my own, feeling slightly paranoid from all the stares I was getting and people smiling and wanting to talk to me, and the fact that sweat was dribbling down my thighs at 10.30am, I took refuge in the Museo de Antioquia so I could see more of Botero’s paintings.

This was my favourite museum so far!

It was like a gallery, hushed and spacious.  So many paintings and sculptures.  So much to see. How could I not have known about this artist before coming here?! 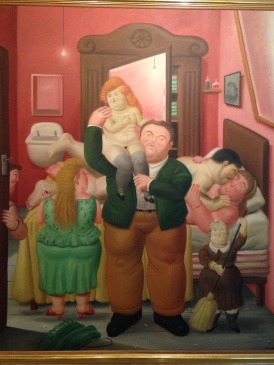 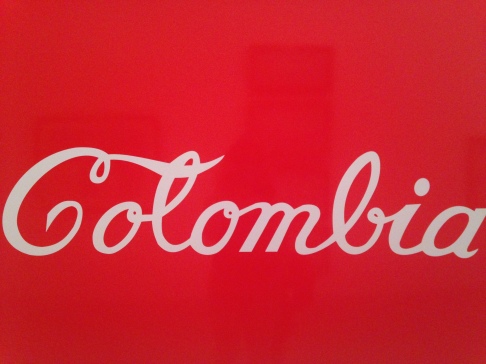 Once I had my fill of all the floors – I felt I must – I tried to find the Parque Bolivar and the Metropolitan Cathedral but got lost again.  They were only two streets away!! D’oh! 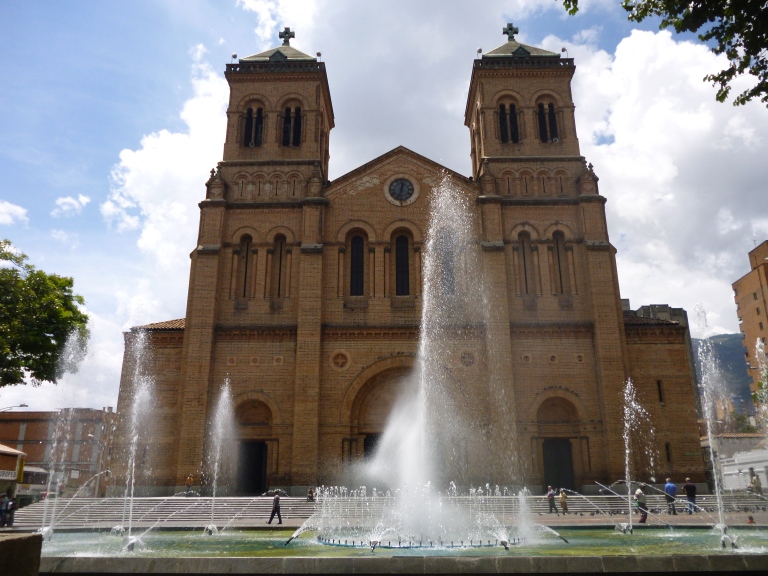 I must admit, I didn’t feel comfortable walking around.  Men would come within centimetres of my face to smile at me, woman would stare me up and down, there were a lot of down and outs in the parks and I was painfully aware that this was a non-English speaking city and my Spanish didn’t pass muster.  Still, I had the afternoon to spend with Tio (uncle) so I made my way back to the guesthouse to regroup.

Tio picked me up and took me on a ride of the metro cable.

One of the highlights of my trip!!

The metro is an overhead train/tram line and also incorporates the cable cars that take people to their homes in the comunas (slums). You can ride it all day if you want and it takes you to all the sights of the city.

He was so patient with me and we had a brilliant afternoon speaking pidgen to one another – or to be fair, I spoke pidgen Spanish to him and once I got used to his accent, his English was pretty fluent.

Once I was chaperoned, I relaxed and found the Medellin people to be warm and friendly and curious.  I only saw a couple of other tourists so was glad I’d picked a guesthouse away from the backpacker area and was ultra grateful that my Spanish teacher had put me in touch with her Tia y Tio (aunt and uncle) – I really felt I was rubbing shoulders with the locals and gaining a small insight into how they live.

We took the metro cable up into the comunas and even though it’s a horrible way for people to live and the houses are precariously perched on top of one another on the steep mountain side, I found it architecturally beautiful. Houses are red brick with tin roofs, washing is strung up on balconies and everything is higgledy piggledy.

As well as the metro cable, the government have built roads so buses can now take people home, and electricity and street lights have also been installed. During the winter months there are horrible landslides and people lose their homes so the government are also building them flats to live in.  These are a bit of an eye sore as they’re high rise and don’t fit into the landscape but it’s so much better than the horror of people losing their houses and belongings. The land that’s been lost in the landslides are turned into cooperative businesses like flower growing (Colombia is one of the biggest flower producers in the world).

When we’d finished our tour, we went onto the streets I’d felt uncomfortable on earlier and thankfully that was no longer the case.  I was still stared at but no-one came up to me any longer.  Tio treated me to my first empanada (a fried cornmeal pastry stuffed with pork) and a pineapple soda which tasted like Fruko – if you’ve ever been to Turkey and tried Fruko you’ll know exactly what I’m talking about it – its artificial soda at its most rank!

Back at the guesthouse we looked over the terracotta roofs (my favourite kind) of Medellin from the terrace. Great black clouds rolled in over the hills and rain started to fall again.

It was time for Tio to leave and me to get ready for a romantic dinner for one. I was salivating at the thought of having flame grilled pork, cooked right in front of me again – it was so juicy and fat and lovely and delicious.

But before I got myself spruced up, I watched Mother Nature at her best as half the city was covered in black clouds, the other half in white clouds with sun filtering through and an electric storm raged over the hilltops.

Where everything was black, a bright ray of sunshine hit the statue of Jesus sitting on the spire of the Parroquia de Jesus Nazareno, the beautiful yellow church I’d passed earlier.