What a surprise when I walked across the Millennium Bridge on my way home from work and came across the Christmas Market at Tate Modern!

Having had a dreadful day at work updating my boss’ contact list and trying not to fall asleep throughout the day, the twinkling lights, smell of glühwein, churros and chocolate, bratwurst and the charm of the merry-go-round put me in good spirits.

I’d forgotten how much I like the walk from the Tate to Waterloo along the Thames Path.

You can do it any time of day or night and a) feel safe and b) never get tired of the sights.

Past the Tate Modern with views of St Paul’s on the north bank, you get to the Founders Arms. It’s expensive for a drink here (two large glasses of red came to £17.30 – I should’ve bought a bottle!) but with heaters and tables outside, you can enjoy your drink with the never tiring views of the Cathedral, listening to the lapping of the Thames and the cool breeze wisping around you.

A few more metres and Blackfriars station is in front of you – the largest solar panelled bridge in the world. It’s pretty awesome to see as the platforms extend across the whole river.

Catching a glimpse of the HMS President (now a river bar) built in 1918 and one of only three surviving warships the Royal Navy built during the First World War, you pass under Blackfriars Bridge to a great summer pub, the Doggetts Coat & Badge pub.

Things continue on the “make something new from the old” theme as the former Sea Containers House has been turned into a luxury hotel. I’ve had cocktails in their Dandelyan bar on a date and found the seating to be un-date friendly and the ambience was quite cold. Having said that the cocktails were innovative and, of course, were priced accordingly (around £12.50)! The toilets in the hotel are worth the money you have to pay for drinks!

Then there’s the Oxo Tower. What used to be a factory making gravy granules in the 1930s is now luxury flats, art galleries and independent designer shops. On the roof is the Oxo Tower Restaurant and Bar. This is on my “to dine” list. I want to fine dine on the terrace, drink high end wine, admire the view, people watch and have scintillating conversation. A girl can want it all and preferably on deal if I have to pay for it!

Moving on you come to free space and trees, all nicely decked out in blue and white fairy lights. This gives you the breather you need with wide pavements and Gabriel’s Wharf – a lovely space where there are more independent stores and a couple of restaurants.

Next door is the more exciting ITV studios where, in the summer, Amanda and Phil from This Morning, sit outside and interview their guests.

Does Holly “Willabooby” still present This Morning? If so, I may have to venture down next summer and have a gawp at her and Phil, the silver fox J.) 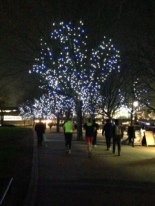 The path stays quite wide and you meander through more trees with twinkling lights guiding your way until you reach the National Theatre.

I had my first introduction to the “National, Darling” when I went to see Danny Boyle’s Frankenstein starring Jonny Lee Miller and Benedict Cumberbatch. It enthralled me. Not just because Jonny Lee Miller was naked for over half an hour (and he’s a fine specimen of a man/monster), but because the play was so sympathetic to the monster. It really showed how horrible people are – the monster learned its behaviour from the people who befriended it and observed how people treated each other. It was such an innocent who knew no better – this world really is horrid. I cried my eyes out.

Anyhoo, the National has a new bar under it called The Understudy. It’s a really cool hangout, sells craft beer, has a huge outside space and stays open late too.

As you get closer to the Southbank Centre you notice the change in pace. The British Film Institute buzzes with diners and drinkers in The Riverfront restaurant. People sit under heaters in quintessential British deckchairs – do they really go together? It would appear so!!

Outside the BFI when the weather is fine (ie not raining and howling a gale), is the second hand book market – a London institution.

Next is the skate park. You can hang out watching the teenagers strut their skate park stuff for hours. Graffiti covers the walls and the teens with their low groin jeans and back to front caps practice their moves. Every morning the council hoses the park down for chewing gum, pee and goodness knows what else! 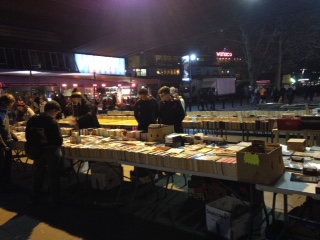 Whilst this is all on the Southbank, Embankment on the north is towered by imposing buildings, one of which is hugely famous.

Luckily for us, Raoul Silva a.k.a. Javier Bardem, the baddie in James Bond’s Skyfall didn’t blow up MI6 at all!!

Just past the skate park and up the stairs you reach the Southbank Centre complex and the Central Bar Terrace outside the Royal Festival Hall. This is one of my favourite places in London.

During the summer if you carry on up the yellow stairs you reach Queen Elizabeth Hall Roof Garden which was designed by the creators of the Eden Project and has a wildflower meadow, mini allotments and a woodland garden. What more can you ask for in the middle of concrete city!  It really is a delightful place to hang out.

The Central Bar Terrace itself is a cool jaunt as they usually have an outside bar so you can drink Pimms or G&Ts to your hearts content whilst people watching. I hung out here after watching Frankenstein and spotted Colin Jackson, World Champion and Olympic Silver Medallist 110 metre hurdler and my crush when I was growing up – seeing him in the flesh definitely made my heart beat! 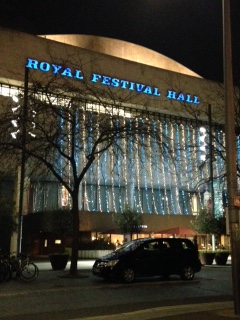 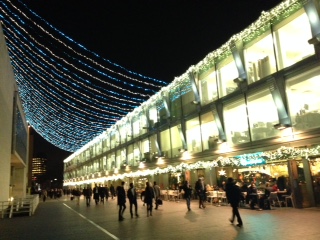 Underneath and around the Southbank Centre are a bunch of chain restaurants that do the job. In the Royal Festival Hall itself is Skylon, a great restaurant selling modern British cuisine, with good service and floor-to-ceiling views of the river. It has good deals and if you want you can just prop up the bar which has an extensive wine list and serves fab cocktails, at a price of course (£13). 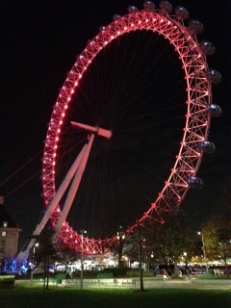 As you carry on under the Golden Jubilee Bridges, the towering wheel of the London Eye gets ever closer, drawing you near with its red illuminations.

Before you reach it you have the temptation of more entertainment with the winter market, cider lodge and rollerdisco as well as “spectacular shows”. There are more twinkling lights, more glühwein and another merry-go-round.

In the spring and summer this is usually the place for the Udder Belly Festival and Wonderground Festival, brilliantly cool nights out with comedy, music, cabaret, alternative and generally off the wall shows – as well as the obligatory food and beer stalls. We’re a nation of eaters and drinkers!! 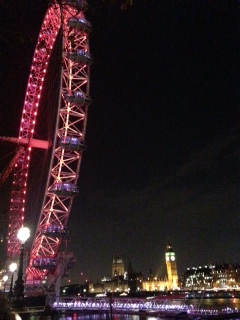 If you have a good camera which unfortunately I don’t as I generally use my phone’s camera, the pictures you can take of the Millennium Wheel and Big Ben at the Houses of Parliament are extraordinary. Two of London’s most iconic landmarks opposite one another was a genius move by the town planners!

Well, that’s the end of my little section of the Jubilee Walkway, as behind all the fairy lights, festive cheer and views that are never tiring, is Waterloo station and my penultimate destination.